Currently, Sir Edward Heath holds the record for the most wins of the Gold Roman Bowls at 4 wins. 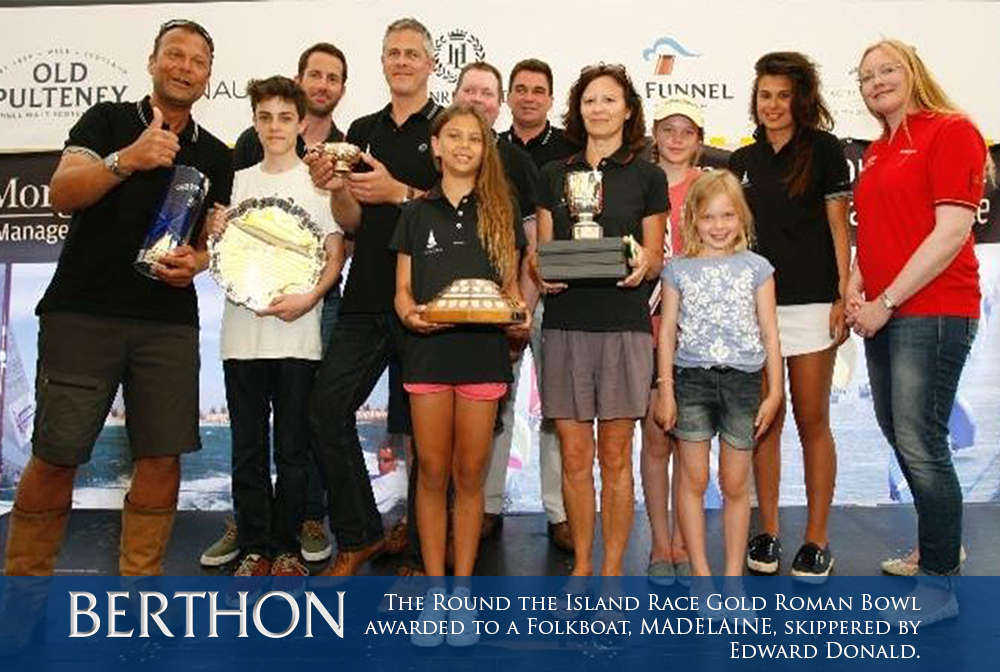 Edward Donald came to us on the 18th June with MADELAINE, a FGBR 707 Nordic folkboat, being in need of some work, one of those jobs being a new race quality, highly polished, paint job for her underwater hull. With her due to be competing in the 2018 Round the Island Race, this would have be a quick turnaround, at the same time not compromising the quality of the finish.

Edward, a customer and dry sailor at Berthon for many years, tells us about his racing background and why he chose Berthon to prepare MADELAINE for this year’s Round the Island Race. “Ted Heath has won the most Gold Roman Bowls (4) with various Morning Clouds. I am joint second with Jeremy Rogers (Contessa 26 Rosina of Beaulieu) on 3 Gold Roman Bowls – in two folkboats – Celia Mary (1 Gold Roman Bowl) British carvel wooden built by my grandfather who was the foreman at Port Hamble, post-war on a ration book in his spare time over 5 years! Named after my eldest daughter and a GRP Nordic Folkboat, MADELAINE with 2 Gold Roman Bowls, was bought in 2001 and is now very much part of our family!

“Participating in Round the Island Race (RTIR) is something my family have enjoyed over many generations and when I started 35 years ago it was a completely amateur affair, apart from a few paid hands on the Admiral’s Cuppers. In recent years all that has changed, with a mix of professional and amateur sailors competing for the Gold Roman Bowl, the professionals in their high spec, high performance and highly turned out yachts. The team on board MADELAINE  are all locals from Hampshire and the Solent; Rob Reed a good family friend, my cousin Mike Stoner and often my two daughters (the eponymous) Madelaine & Isobella and finally their mum (and long-suffering sailing wife) Liesa.

“As an amateur, I have watched amateur/professionals like Jo Richards in Woof and Giovanni Belgrano in Whooper give themselves every chance, with their yachts highly turned out and well raced – the latter also being a 2 time Gold Roman Bowl winner. I thought we were well turned out until I saw the finish on their boats under the water and that of the top Nordic folkboats at last year’s Gold Cup in Kerteminde, Denmark. Learning from conversations with some of these skippers and experts from Berthon, I realised that to give MADELAINE the best opportunity and level the playing field with the top amateurs and professionals in future RTIRs, we would need to do the same.

“This is why I commissioned Berthon to give MADELAINE an underwater racing finish, to give her the potential to compete with the best.” 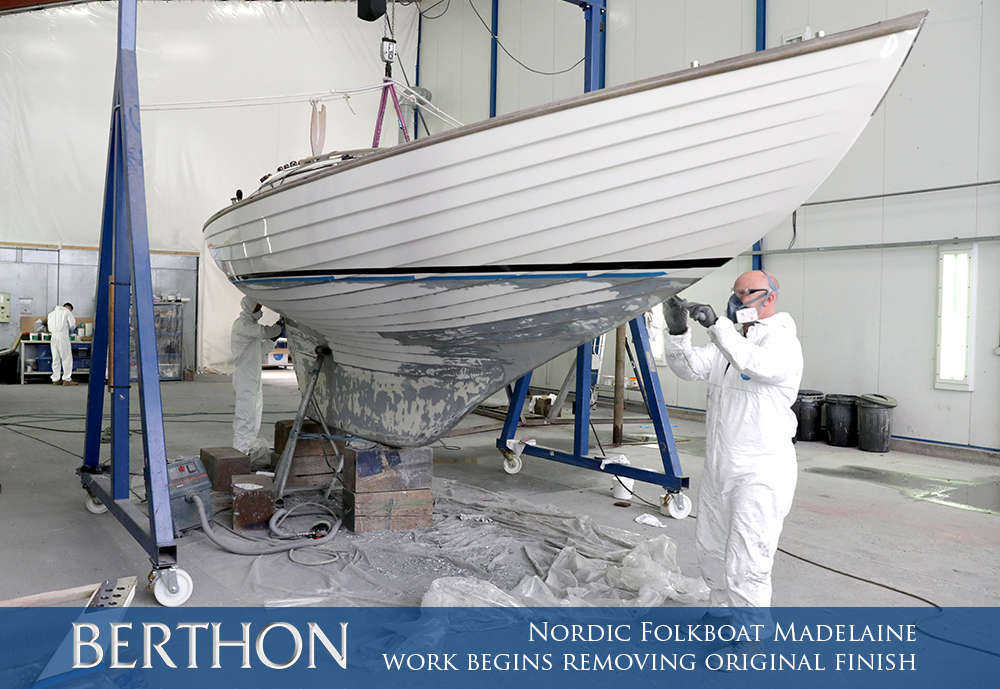 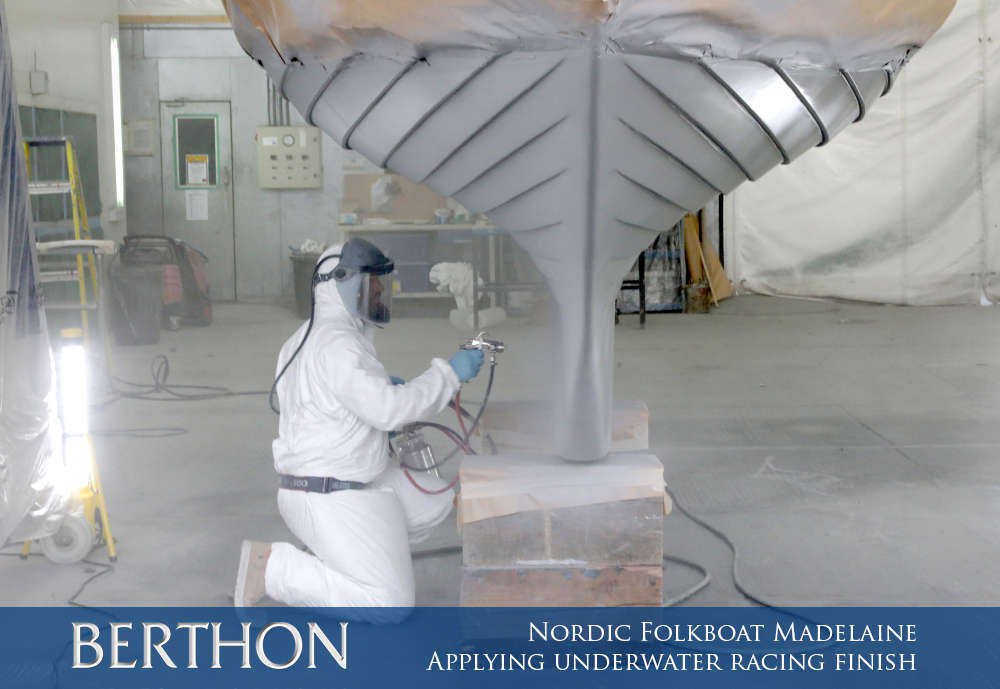 “We have learnt over the years that winning the Gold Roman Bowl – sailings version of the FA Cup or Grand National – requires a fair amount of luck as there are just so many variables for each boat racing; often the race seems to pick the winner. We have also learnt that to keep doing well you have to keep improving every year, especially for things in your control, like the finish on the bottom of the boat. The rest will be down to what we do above the water and fortune – which we hope will combine in the years ahead to allow us to draw level and then get ahead of Ted Heath’s record for Gold Roman Bowl wins and then to be the first British folkboat to win the Gold Cup, the international Nordic folkboat fleet’s version of the World Cup.

“Thanks to the whole team at Berthon for their expert advice and the racing finish achieved for MADELAINE, we will keep you posted on where this years’ RTIR places us.” 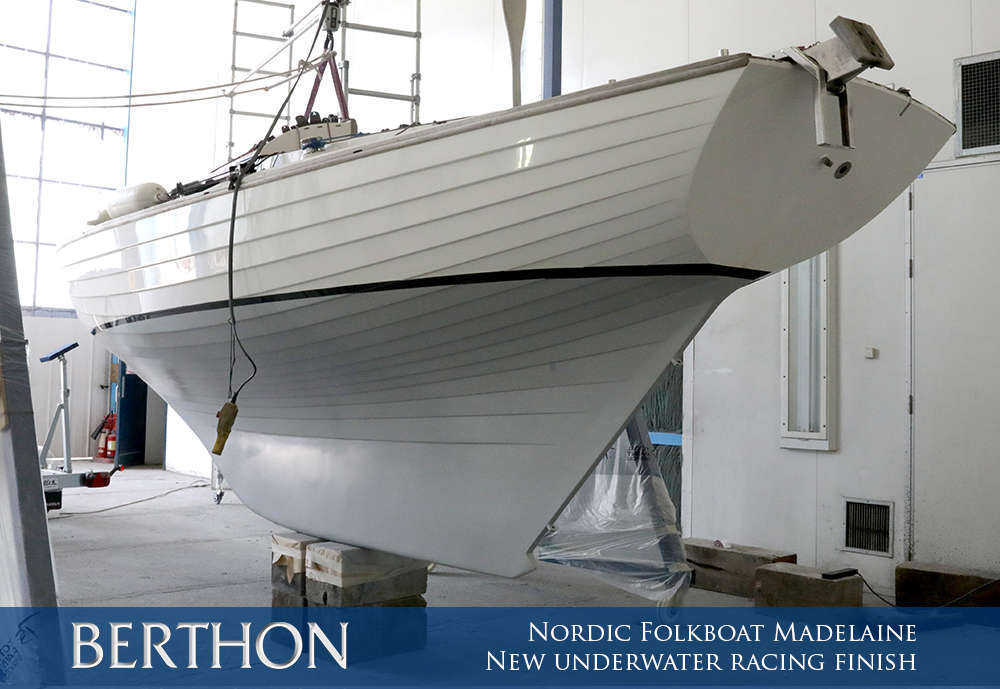 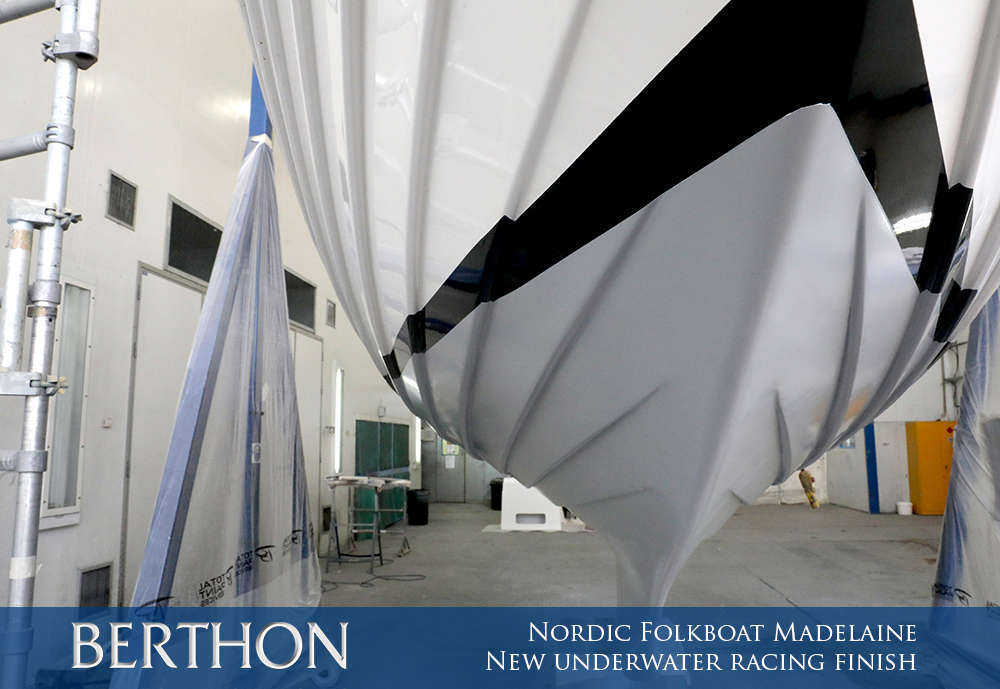 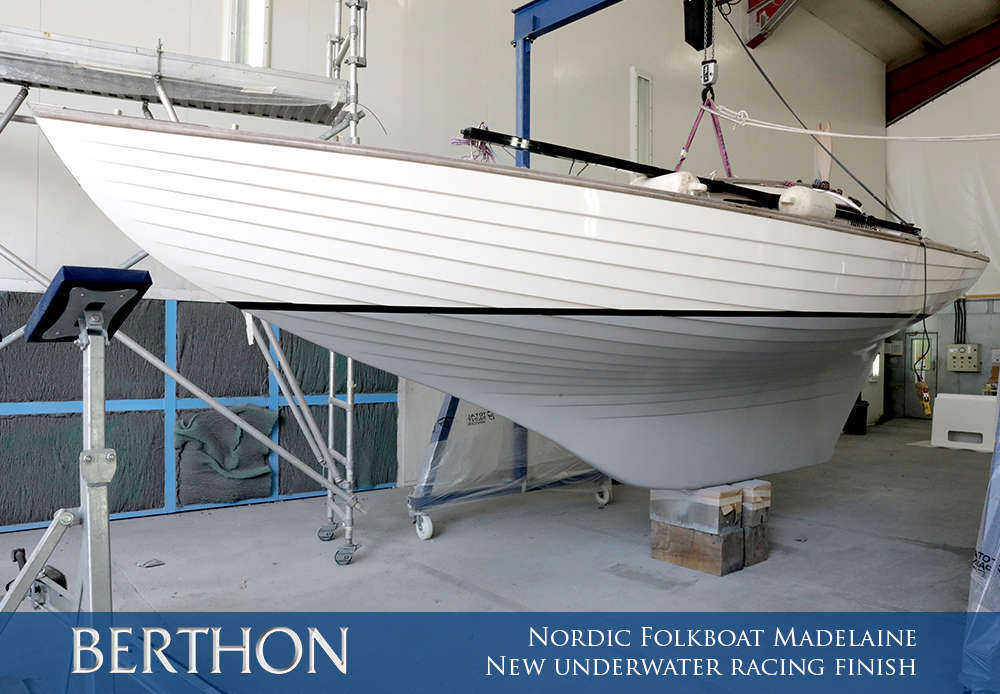 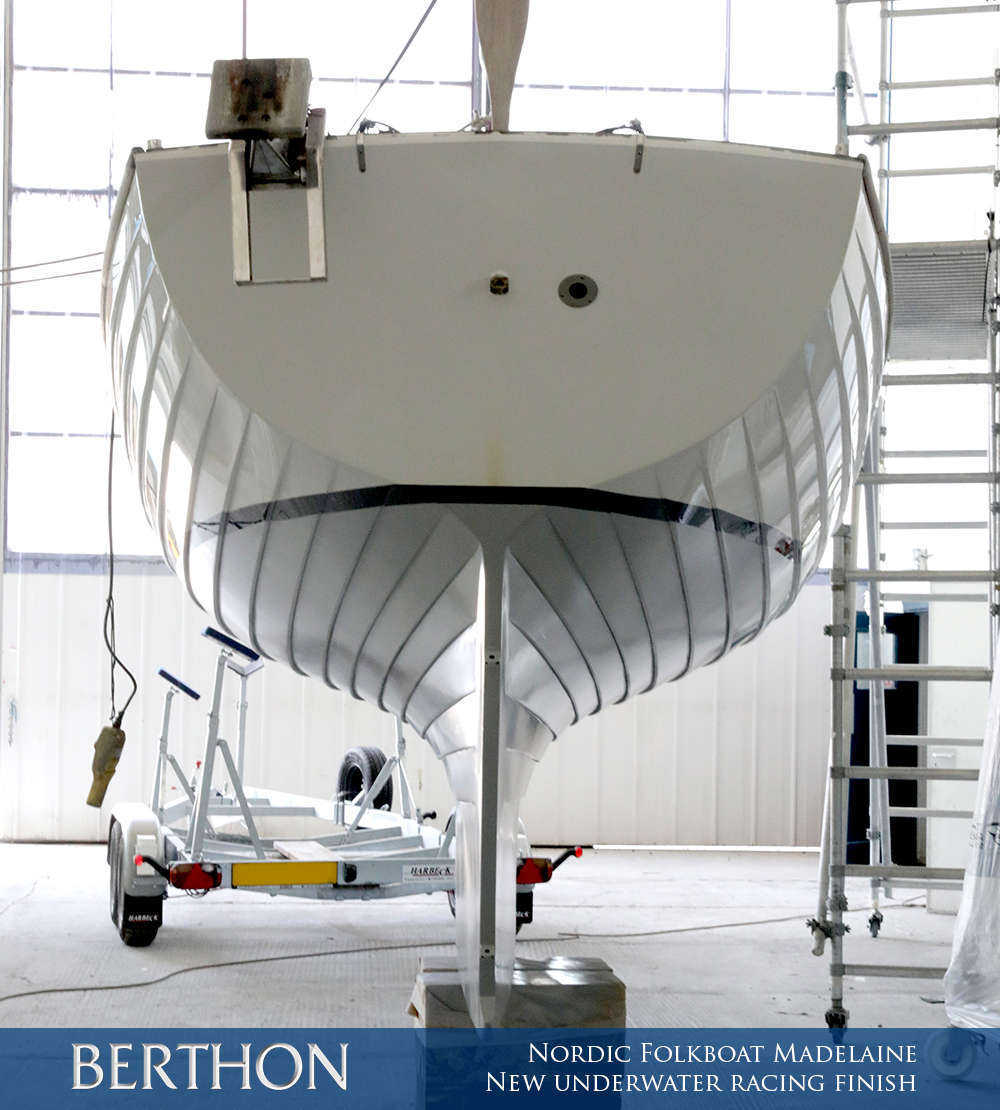 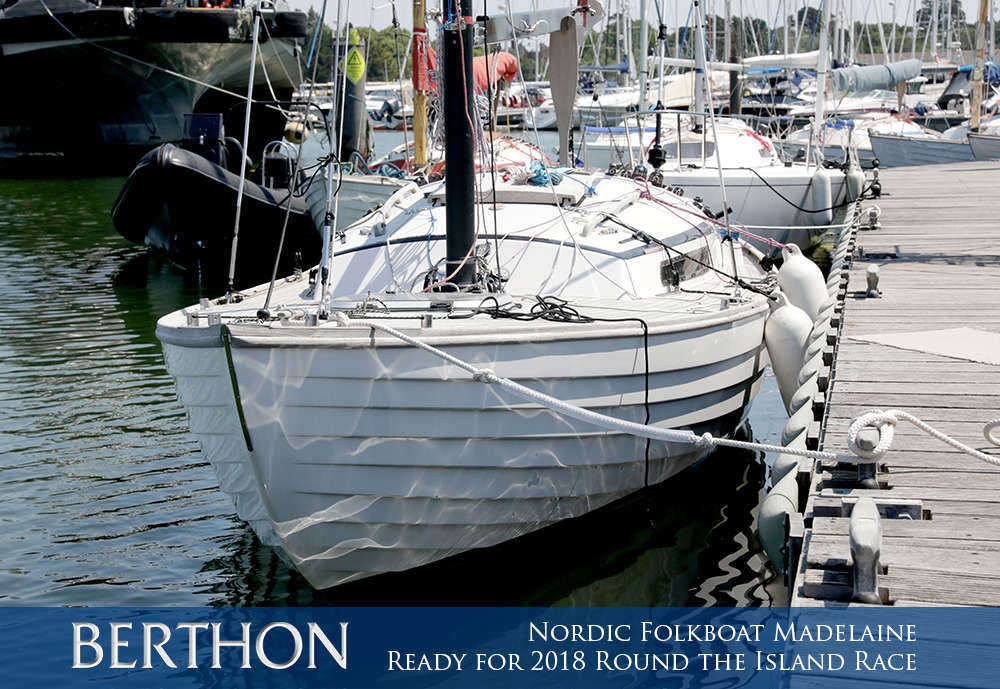 While preparing MADELAINE for the Round the Island Race, not only did we fully strip back her underwater hull to the original Gel Coat, but in true pro-fashion, the Light Grey Durepox finish was polished smooth with 2000 grit, but we also serviced her mast re-touching all possible corrosion points. We built a new 12:1 dyneema, new 5mm Jumpers and purchased a new Jumper control. All halyard exits for the IRC spinnaker and Code 0 were serviced where we also fitted a new main halyard along with a new main halyard tweaker. A new backstay control was purchased and fitted for more travel and the traveller controls were re-worked, to top it all off we built and fitted a new whisker pole.

From everyone here at Berthon we wish Edward Donald and his team on-board MADELAINE all the best in this year’s Round the Island Race.

If you are preparing your boat for racing, are wanting a new paintjob, or even a complete refit, please contact our team for any information and advice; we are always happy to help.

Editors comments – Madelaine came second overall, narrowly missing out on the coveted trophy to HIGH POTENTIAL, another Lymington based yacht! Congratulations to both but Madelaine shows that race preparation adds to consistency….and, of course, there is always next year.