CJ LEGEND, also known as NICORETTE, SKANDIA, ROYAL BLUE, is maybe the most successful sailing Maxi racer in Northern Europe and is continuing to perform at top class, both racing and in charter.

In 1995 the yacht was bought by Ludde Ingvall and totally rebuilt according to measurement rules. Nicorette sailed her around the world in one of the most successfully commercial campaigns in yachting history.

In 1999 new owners took over and the yacht has been kept in mint condition since. The hull was reinforced and keel refitted in 2005. Sail wardrobe has been updated continuously. In 2011 the yacht had a total refit, keel and rudder out, x-ray of rig and delamination fixed. The yacht got her white colour back, new engine, new rigging, navigation computers, rafts and safety equipment.

Due to its size of 72 feet, CJ LEGEND can offer you the opportunity to directly participate in and experience inshore and offshore sailing and team building at its best.

CJ LEGEND can offer day sailing of up to 12 people per sail (German Commercial Sail Boat) and can be chartered for racing in Northern Europe. Always up for a challenge.

The yacht was built as CJ LEGEND, sailing for France in the in the 1990 years Whitbread around the world, being beaten by the legendary Sir Peter Blake and STEINLAGER II. 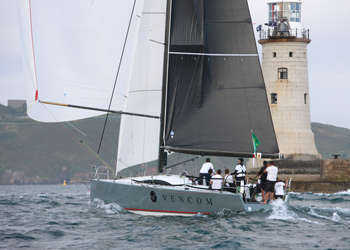