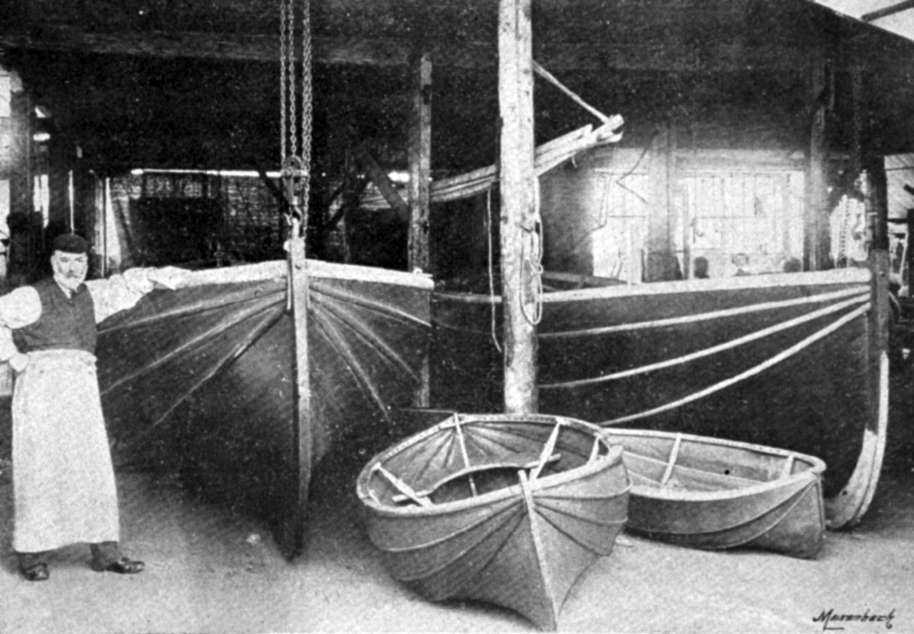 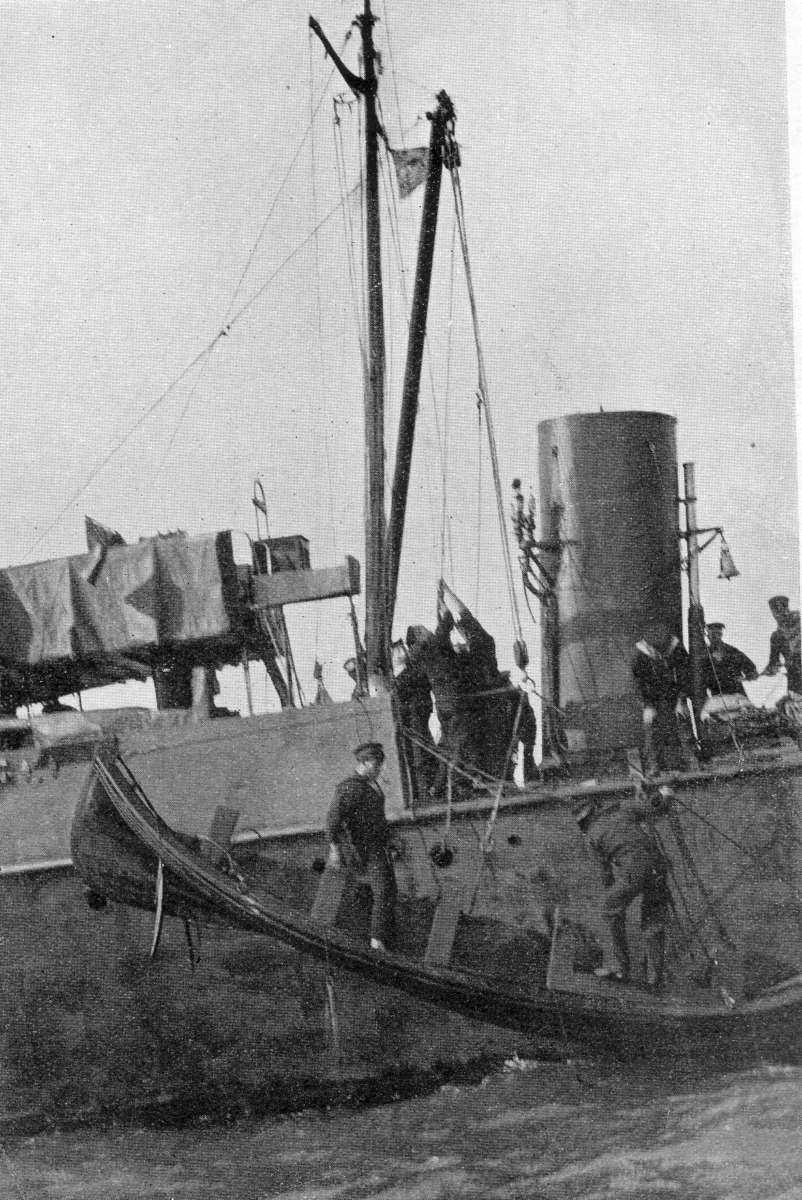 In 1854, the Reverend E. L. Berthon pioneered a new design of lifeboat that would eventually help to normalise carrying adequate safety boats, and would gather supporters and customers from across the globe.

Reverend Berthon was inspired to design a space-efficient lifeboat following the shipwreck of S.S. Orion off Scotland’s Port Patrick in 1849.  The only lifeboats aboard were commandeered by the ship’s crew and firemen, with more than 100 passengers perishing in the tragedy.

Shortly after the disaster, the Reverend Berthon received a letter from his friend the Reverend Clark, a survivor of the wreck. Clark expressed his significant dismay at the great loss of life, stating “Surely there is some way in which sufficient boats may be carried for all persons on board.”  Reverend Berthon, an innovative and forward thinking designer, quickly developed a folding lifeboat to fit the niche requirement in 1851.  The Berthon was an innovative and elegant solution.

What would become well-known as the “Berthon” was a collapsible boat, requiring a minute amount of space in comparison to rigid
alternatives.  Easily stowed and semi-automated in its launch procedure when attached to a ship, it was formed of a series of Canadian Elm wooden ribs which reside on either side of a strong keel.  Between these ribs were impervious yet flexible double-skinned canvases coated with a secret mixture to add water resistance.  It is said that Berthon tested the durability of these canvasses by pouring termites and ants onto a treated piece of fabric to see how it would hold up, in addition to normal watertight testing. 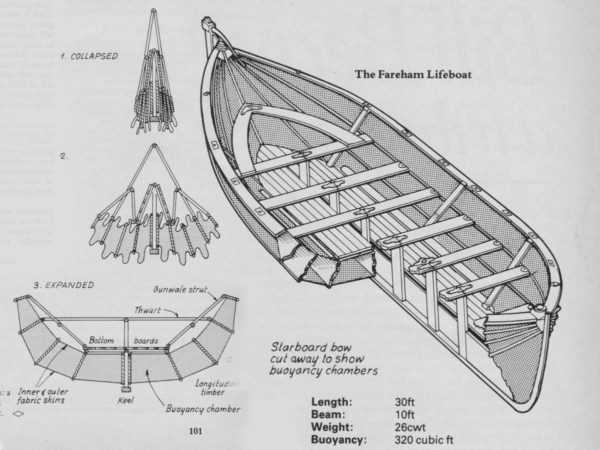 Once the lifeboat was opened, these canvas folds stretched into multiple air-filled, watertight compartments to give the boat buoyancy.  Importantly, these pockets of air gave buoyancy with contingency: should one compartment fail, as long as the others were undamaged they would remain inflated and keep the lifeboat afloat.  They were easily repaired, another vital feature.  A number of struts ensured that once launched, the lifeboat kept her shape and integrity, and seats or thwarts were available depending on the lifeboat’s size.

A video of a Berthon Collapsible Boat being collapsed and expanded can be seen on YouTube here.

A description from Thomas Humphrey Ltd in a note to a potential customer shows how suppliers described the design:“The frames are constructed of wood or iron, and are arranged in segments which are strongly hinged together at the ends; these frames support a flexible double covering, arranged as an outer and inner skin, formed of tarred canvas.  The space between the double skins is divided by the frames into from six to ten watertight compartments; the bottom boards, thwarts and seats are similar to those in ordinary boats and when in position, give considerable rigidity to the whole structure.  Oars or sails may be used and provision is made for shipping a rudder.”

The Berthon was notably used in the Great Paris floods of 1910, allowing residents to continue to move around the city whilst the streets stayed underwater for a week. 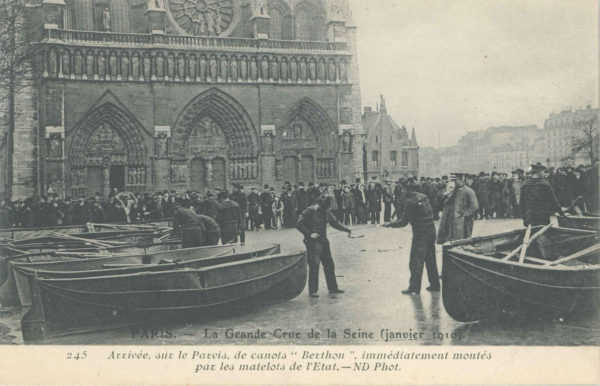 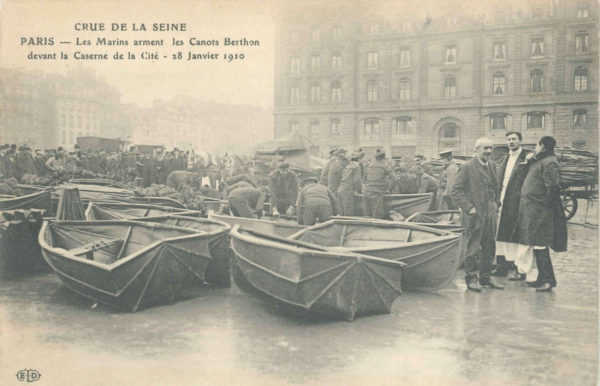 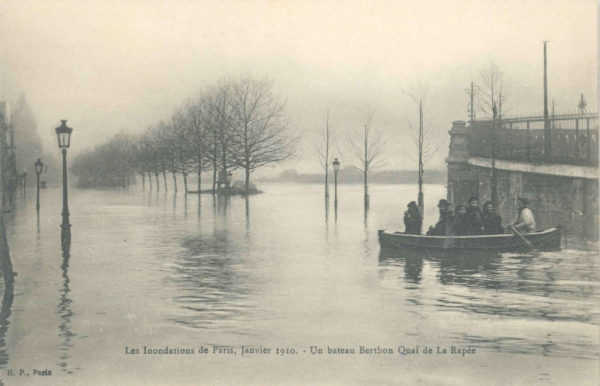 Berthon’s design was initially commended by the Admiralty, who suggested Her Majesty’s Navy carried a number on board each ship as lifeboats. 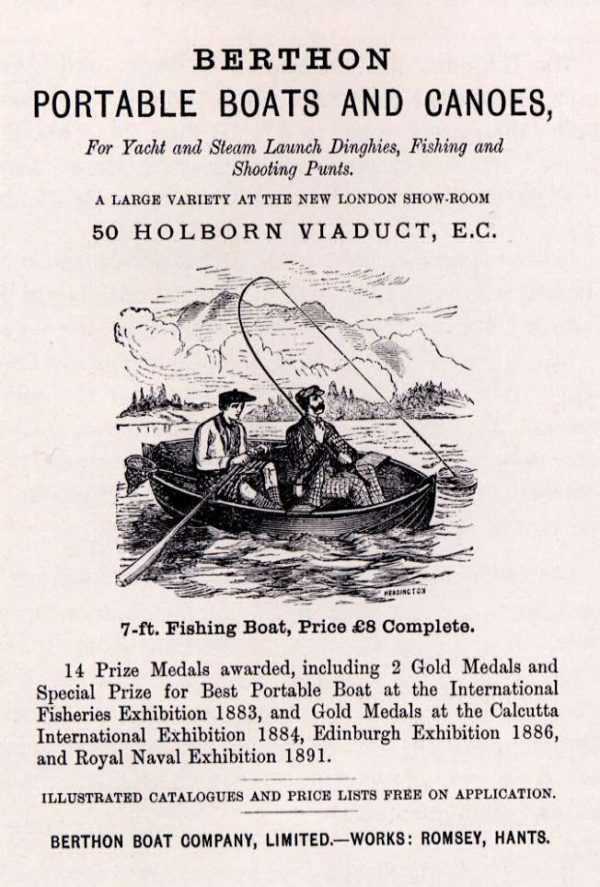 Queen Victoria herself was a fan of the Berthon, requesting a demonstration at Osbourne house on the Isle of Wight after she saw one at the Great Exhibition in 1851.  During the demonstration the Prince of Wales commented that a cannonball would rip through the canvas hull easily.  Berthon responded by asking what hull a cannonball would not go through.  Queen Victoria was reported to have been greatly amused by this riposte and suggested to the Lord of the Admiralty that the lifeboats should be carried aboard naval vessels.  However, The Lord of the Admiralty was not enamoured with the design (reportedly he was unimpressed by the lack of positioning for a gun!), and only ordered two lifeboats, ostensibly to appease the Queen.

A number of frustrating years later, the Berthon was finally carried on board both the Royal and Merchant Navies.  It also became popular among fishermen or casual yachtsmen – particularly the foldable canoe-like boat, and many of both designs were supplied to customers across the globe.  The Reverend’s perseverance paid off and the lifeboat became steadily more and more popular.  Berthon had to move his premises to keep up with demand, building the boats in Romsey where the site is now commemorated with a plaque.  At the same time, in 1877, Reverend Berthon appointed his son Edward Pearson Berthon as manager, to give him more time to concentrate more on his church duties.  Until Edward’s death in 1917, the lifeboats were successfully produced and sold worldwide and continued to be built in Lymington when the May family combined The Berthon Boat Co Ltd with The Lymington Shipyard.

There are many stories of Berthons being used for various purposes; from sailing excursions across the channel; to expeditions on the river Kwango in Congo, Africa; to use as lifesaving apparatus on cruise ships.  More information about the incredible uses of the Berthon can be found here.

The collapsible lifeboat remained popular for many years, it is estimated 1400 boats were produced in total.  The Berthon sadly went out of production following the Second World War, when rigid construction became preferable.

It was assumed most Berthons were lost, however there were some survivors – which may be in part due to the treatment of the canvas and the use of high quality wood during their construction.  A small number of Berthons are now on display across the UK, carefully restored.  There are also several in private collections.

Frank May acquired the assets of the shipyard following Edward’s death. The yard moved to Lymington, to what is now the namesake Berthon Boat Company Ltd.  Whilst the collapsible fifeboat is no longer produced, Berthon has built many of the modern lifeboats for the RNLI, notably the Severn and Shannon class, and maintains close ties to the Georgian town and its history.

Disclaimer: this is a potted history of the Berthon Collapsible Lifeboat.  Whilst we hope you find it interesting, it by no means covers the entire scope of the history or adventures of the Berthon.  Should you wish to learn more, information can be found online and at various heritage centres across the UK. 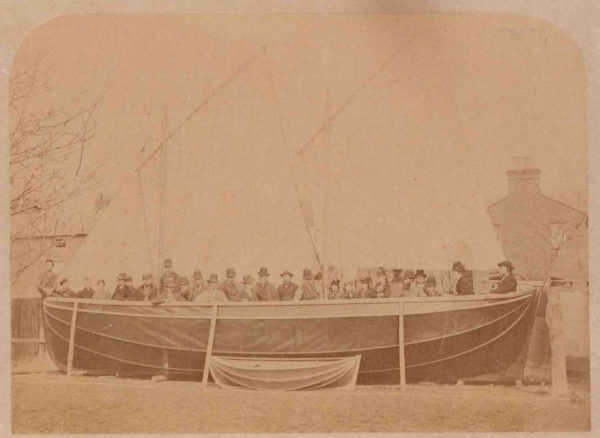 Testing the number of people who can fit in a Berthon lifeboat and a smaller version in front.