Home / About Us / Berthon History

Berthon has been trading continuously since 1877, and occupies a riverside site mentioned in the Domesday Book. Click on the date tabs below to see how the company has developed over the years.

John Rogerys owned the shipyard from 1513; he later sold to Charles Guidot. In 1667 it was bought by John Coombes, all the while continuing the building of wooden ships.

Shipbuilder John Coombes bought what is now the Berthon site in 1667, described then as “all that piece of mud or sea oozy land, bounded on the North by the town slip, on the East by the sea or river, and on the West by the King’s highway”. Estate agents obviously weren’t what they are today!

Gentlemen’s sailing yachts & the America’s Cup
Thomas Inman
In 1819 Thomas Inman bought the yard, building customs cutters and gentlemen’s sailing yachts. The three most famous were Alarm, Arrow and Lulworth, all of which raced against the schooner America around the Isle of Wight on 22nd August 1851, the forerunner of the Americas Cup. Sadly Arrow ran aground cheating the tide, Alarm went to her rescue and their race was over. America cut inside the Nab light, Lulworth was beaten and the rest is history.

Mr Courtney took over the shipyard in the late 19th century.

The demise of the Reverend Berthon’s enterprise at Romsey is not the end of the Berthon Collapsible Boat story. Following the death of Edward Berthon junior, Frank May acting as nominee for his brother Harry (who was at that time in the U.S.A.) bought the assets of the company. The brothers commenced trading as the Berthon Boat Co. in 1917 at Lymington Hampshire, having purchased the boatyard formerly known as Inman’s and then Courtney’s. Harry was no stranger to boatbuilding having formerly tradedas May Harden and May at Hammersmith London and later with Morgan Giles at Hythe, Southampton Water. When the latter partnership ceased Morgan Giles established a boatyard at Teignmouth, South Devon. The majority of the newly formed Berthon Boat Co. work concentrated on the production of high class yachts but collapsible boats continued to be supplied until the outbreak of World War II.

Berthon to May
Frank Aubrey May was wounded in the trenches in 1917 and was invalided out of the army due to the loss of an arm and a shattered knee-cap. He came home and bought the Romsey-based Berthon Boat Company as a nominee for his American-resident brother George, Edward Berthon having just died. His partner was to be his other brother Harry, the present-day owners’ great-grandfather, who was too old to serve in the war. Harry was formerly a boat builder on the Thames at Chertsey, then at Hammersmith where he built International 14s with Frank Morgan Giles under the name Morgan Giles and May. With an office on the Strand, from where they watched the 1911 Coronation, forward orders grew to some £20,000 which necessitated moving the boatbuilding side to Hythe on Southampton Water the same year; having built 6metre yachts the pair were instrumental in the early hydro/seaplanes. In 1914, Morgan Giles then headed for Teignmouth where he served his apprenticeship and ran a very successful boatyard for many decades; The May brothers welcomed a third partner and traded under the name of May Harden & May until the Lymington Shipyard was bought in 1918. Berthon’s HQ was moved from Romsey as the brothers took control of the famous Inman yard that built many racing yachts dating back the early years of the 19thcentury including Lulworth, Arrow and Alarm, the latter two having competed in the Round Isle of Wight Race in 1851 that eventually became the first race of the now renown America’s Cup.

In 1921, Berthon continued building a 14ft National Racing Class dinghy, together with this motorcycle sidecar (right) in wood at a cost of £2/18/9d – history doesn’t relate as to the success of the sidecar upwind!

14ft National Racing Class dinghies and sidecars
Harry May & Morgan Giles
Harry May bought the Lymington shipyard in 1918, and the next year moved Berthon Boat Company from Romsey, merging it with his new Lymington shipyard. Under the Berthon banner, Harry developed a diverse business of yacht and commercial boat building, repairs and mud berths. As well as one-off yachts such as the beautiful Vera Mary, a large class of West Solent one designs was built, and the Gauntlet series began. Tugs, pilot boats and naval launches also provided a mainstay of work.

Harry ‘Puffer’ May was charming to customers but rarely bothered with his employees, to whom he seldom spoke. His nickname ‘Puffer’ can be attributed either to his persistent cigarette smoking, or to his habit of huffing and puffing when he was called upon to make a disagreeable decision!

The 36ft 9ins GAUNTLET was the result of an enquiry for a yacht by Mr Berge in 1934; however, he decided on a different design built by Phillips of Dartmouth. Harry May was so incensed by this that he built his design anyway and challenged the Phillips boat to a race. By throwing down the gauntlet and winning the race handsomely, this now famous design was born.

The first brokerage advertisement appeared in 1935 under the heading ‘Lymington Shipyard – Motor and Steam Yachts’.

The first Boat Show in 1955 attracted 120,051 visitors. Berthon did not exhibit but ran an advertisement in the yachting press headed ‘BBC’ and explained that “we do not go on air, but we build yachts, launches and tugs

Racing and dredging
David May, Harry May’s son preferred banking, becoming a director of merchant bank Guinness Mahon, so the Lymington shipyard business was passed on to Harry’s grandson, David, who took over in the late 1950s. He was an active yacht racer who built many winners, often sailing them to victory himself. In 1967 David May revolutionised Lymington by dredging the shipyard foreshore and building the marina.

Lymington Marina was officially opened in 1968 by Admiral of the Fleet The Earl Mountbatten of Burma.

Berthon built the 36 ton SHELMALIER in 1966, the largest yacht to be built in Britain for 13 years. SHELMALIER was sold to an Italian syndicate by Berthon International in the year 2000.

Modernisation
David’s sons, Brian and Dominic May took over in 1990. They consider themselves tenants for the next generation.

The early 90s brought an economic downturn which Berthon weathered despite old sheds and machinery, and outdated working practices. Brian and Dominic believed that the business needed serious investment to take it into the 21st century.

In January 1990, Lymington flooded badly, including the Berthon shipyard. Berthon’s river wall was therefore raised and flood defence gates fitted at slip and travel lift junctions to safeguard the site.

We currently have 140 staff at our Lymington HQ, with a wide range of leisure and commercial clients, refitting, repairing and maintaining sail and motor boats, pilot vessels, RIBs, dive boats and traditional wooden craft.

On 4th May 1968 the Earl Mountbatten of Burma opened Lymington Marina.

“Mr May has mentioned that my wife’s father and grandfather had a real interest in the Berthon Boat Company. This was because the Reverend Berthon, who invented the original collapsible boat, was the Vicar of Romsey Abbey, and their personal friend. I have had personal experience of Berthon Boats, for we carried two of them onboard the Anti Submarine Escort, H.M.S. “P 31” when I was her First Lieutenant and Second in Command in 1918 during World War I. We would never have had room to carry boats of this size if they hadn’t been collapsible; and very good they were too.”

Reverend Edward Lyon Berthon (1813 – 1899), English Inventor, and creator of the Berthon Collapsible Lifeboat. In 1841 Berthon entered Magdalene College to take up theological studies for the Church, and in 1845, he was ordained as a curate of Lymington. His new coastal location allowed him to indulge his passion for nautical invention, but the idea for which he is most recognised, was that of the “Berthon Collapsible Lifeboat”.

The ingenious design was a response to one of his clergymen, Reverend Clark, surviving the shipping disaster of S.S ORION, which sank in 1849 where tragically 100 people drowned. Berthon began designing and building a prototype of the collapsible lifeboat. The portable lifeboat would be made from waterproof canvas stretched over 14 feet of hinged timber and quality-tested by allowing armies of ants and termites loose on the fabric. 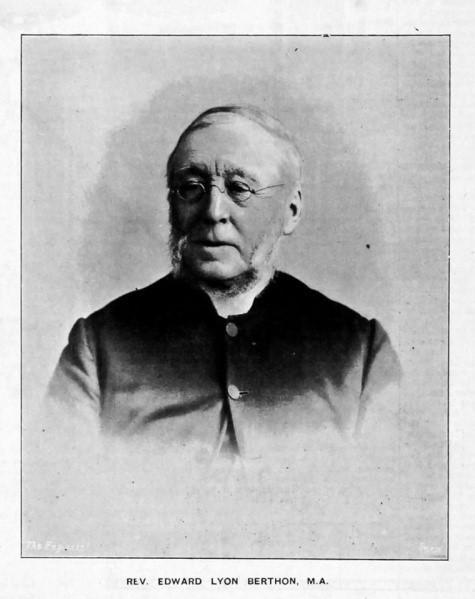