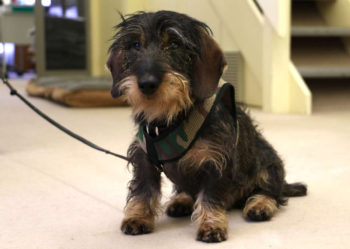 Taking the dog for a daily walk has been both a form of exercise and a pleasure, until this last week! As if Covid-19 was not enough to deal with, our normally well behaved wire-haired Dachshund, Mica, would either follow or lead the way on whichever paths were chosen, sea wall or New Forest. In the latter an occasional squirrel crosses the pathway and with nose to the ground off he goes keeping a sensible social distance from us and said rodent until the latter climbs a mighty beach tree seeking sanctuary & peace. It’s a game he plays in Hyde Park with alacrity and has never won. He returns to the path and on we continue with dusk casting longer and longer sun dappled shadows.

At the end of a busy first weekend of boat owners using their hitherto idle steeds, I elected to wander down the car park with Mica to give his little legs a stretch and I was occasionally distracted, chatting to bronzed boaters with large grins on their faces after a day at sea or those still preparing their vessels ashore for a launch during the coming week. Mica was rather too friendly with an owner, which caused me to ask whether her dog was on heat? Yes, she answered, that’s why she is at home. A little later I turn my head down akin to the teen generation to pen the occasional reminder-email (to self) but, wary of our little creature, an eye kept open for his waggly tail. Well, that was until the tail was no longer to be seen. I last saw him disappearing into the grassy area and thought nothing of it; fenced on two sides what could go wrong? Lots!

It had been a couple of weeks since I had been and the grass was double the height and even standing on boats nearby did not afford clarity. The tail is never up when a chase is on and with a good 20 knot breeze all the grass was moving – not just where the dog was! Ok, I keep speaking quietly to no-one but the dog to ensure he knows I am there whilst assiduously criss-crossing the grass and observing plenty of little runways – were they his or those of dormice; perhaps both? After a few carefully planned sweeps I could only think he might have scuttled back across the yard and escaped onto Bath Road….a quick walk to the common ground ensued and questions galore to those exiting. No such small beastie seen! Not good.

On my way to the Town Quay abovementioned lady with aromatic female dog hormones wound her window down and I asked if the fiend had been seen. No. Plug on to Town Quay where teenager purports to have seen said lost item! Push on to Lymington train station and call for help from a slightly panicky family! I thought I’d wend my way towards aromatic Lady’s house in case the westerly wind had wafted a temptress sweet smelling scent in Mica’s direction. No, again! Two hours after leaving my office, my daughter found him in the long grass at the end of the marina. Teen on quay had clearly had a giggle or two sending me on a wild goose chase.

On Monday evening, my wife and daughter call me to join them on the sea wall because the fiend was trapped in a melee of gorse and bramble beside the gravel track at the end of his 5m lead (designed to give him some freedom)…stuck, probably with head down a rabbit hole. Ok; so I return home form the office to fetch a pair of boots, gloves, shears and secateurs, plus torch since the sun was setting. What a palaver, but the dog was eventually recovered with a copious amount of prickly thorns and those sticky round seed balls that are a devil to remove. No chopping was needed. Just patience awaiting Mica to engage reverse gear.

Tuesday, no walk; serves you right!

Wednesday; I return home for lunch after a traumatic phone call with my mother and, before I could recount it to the family, wretched dog’s nose was flushing something out of a drain. I ignore the dog because it my turn for a pee. I hear screams and emerge to see my wife with dog in arms, the latter pissing blood from two bites to the cheek*. Wretched rat had disliked being chased after being flushed and stood its ground before launching an attack which my wife saw and is now embedded in her mind as if the reply button was jammed on eternally. My daughter despatched to find antiseptic solution and mop kitchen floor of blood; I was detailed to seek rat and so gathered axe for protection! Too late…..rat already deceased; joyful exclamation to family: Guess what? What? Mica won; rat lost but found!

So, is this all about animals and nature amidst virus, lockdowns and protocols?  No, I explained to my family there was more: that my vulnerable 80-year old mother, who had self-isolated for two months and never left her home had been phone-scammed by a RAT!

*Rats can pass on Leptospirosis, also called Weil’s disease, and although rare in the UK, the local vet prescribed an antibiotic for Mica.