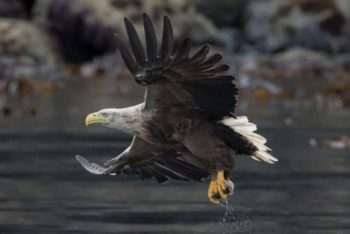 It is an extremely soothing thought that whilst we retreat indoors to shelter against Covid-19, Mother Nature resolutely marches on.

In a joint effort by Forestry England and the Roy Dennis Wildlife Foundation, the first re-introduced White Tailed Eagles have flown their nests to begin exploring the skies of the United Kingdom.   Hunted to near-extinction in 1918, 6 eaglets were released to the Isle of Wight in August 2019 as part of an extended plan to reintroduce the native Eagles to the UK over the coming years.

One of the White Tailed Eagles appears to have used the strong southerly April breezes to explore as far north as Middlesbrough – quite possibly as attuned to using the wind as sailors!  All Eagles were fitted with a tracking beacon to facilitate monitoring of their movements across the UK.  The Eagles appear to be following natural instinct, with all four exploring distinctly different sections of the mainland, independently of one another.

A detailed and fascinating insight into the movement of these Eagles with comments from the project director can be found here.  The Roy Dennis Wildlife Foundation is able to make deductions as to the activity of the eagles from their movements, altitudes and distances travelled.  Some days, the eagles travel upwards of 100km; whereas others they remain in a 1km radius.

We are thrilled to hear about the successful reintroduction of Eagles and will be sure to keep an eye out for them in the coming years, when they are likely to return to the Isle of Wight to roost and, with luck, have chicks.

If you are lucky enough to spot one of these magnificent birds, be sure to report it online!  However, as the foundation notes, please don’t go out looking for them – however exciting, it is not yet an essential journey…