Home / Berthon Blog / Versadock / Coping or capitalising, the choice is yours

July has been another busy month for Versadock with docks being supplied from the sunny shores of the east coast to the depths of deepest Devon. This has not just been a time to sell docks and make hay while the lockdown is eased and the sun shining, it has also been a time to consider the future. The question of course has been, what does the future look like and when, if ever will normal service be resumed. Is traditional thinking going to lead us to glory or do we need to think more laterally?

During World War II, the allies mapped bullet holes in planes that were hit by Axis fire.

They sought to strengthen the planes, reinforce areas that were heavily damaged by enemy artillery. This data would help build the plane that would win the war. 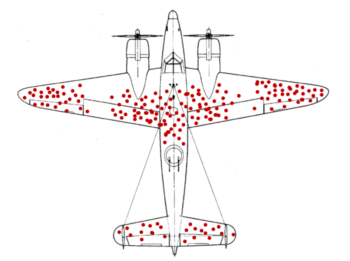 Collating the information in the form of red dots on a drawing would help shape a picture of where the planes were hit with regularity. Theoretically, it was a logical deduction. After all, these were the most affected areas. This map would allow the planes to be redesigned to have heavier armour in these places and therefore lead to less destruction of allied aeroplanes.

Abraham Wald, a mathematician, presented a different conclusion. The red dots represented only the damage to the planes that were able to return, that came home.

The areas that should, therefore, be re-enforced, were the places where there were no points because these are the places the planes were hit and were not capable of returning.

This phenomenon is called a survival deviation. It happens when you look at things you have survived when you should focus on the things you wouldn’t have.

What are you looking at in this crisis?

It is easy for us to focus on our core products at this time and keep things small and manageable.  To stock product we are asked for. What would happen however if we looked not at what we were asked for, but for what we were not? Would this highlight the growth markets for the future?

Coping or capitalising, the choice is yours. To this end, during the last few months Versadock have been developing a number of new products which will be launched in the coming months. Some, re-imaginings of an old theme. These product’s planted firmly in the most concentrated areas of the red dots. However, some of the products have come from analysing the market, looking for the areas where there are no red dots and finding the solution that no one asks for, because no one has imagined it yet. The future is uncertain but what we do know is that Versadock will continue to innovate and lead the market. We look forward to sharing our new products with you in the coming months.