Either working with a Client’s nominated naval architect/design house or working with our design partners, Berthon can project manage the design and build process from the outset.

Our facilities and resources are able to handle vessels with any hull form, including catamarans, up to 120 tonnes. We are very familiar with the requirements of most international Classification Societies and Flag State Authorities. Our quality and standards are reflected in the ISO 9001:2008 accreditation, for the design, build, repair and refit of vessels in wood, aluminium, GRP, composite and steel. You can always be assured that our builds are extensively planned and executed with the utmost skill and professionalism.

Berthon has been building boats since 1877, in more recent times, this has included the production of pilot boats, patrol boats  and several classes of all-weather lifeboats for the RNLI.  Berthon is experienced in undertaking new build programmes for the private, commercial and government sector organisations.  Over the last 30 years, Berthon has built 36 all-weather lifeboats for the RNLI including the Arun and Severn class lifeboats and, most recently, 12 of the new Shannon class fast lifeboats. 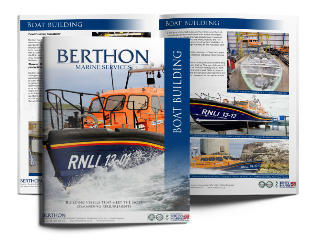 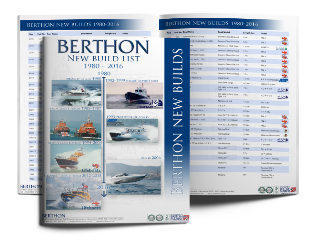 “I think the best evidence of the contribution of Berthon to the RNLI is that we’ve had a relationship for 30 years, and during that time Berthon has built 36 lifeboats: Arun, Severn and Shannon.

Berthon has displayed amazing qualities during the build and I think this is down to the teamwork within the organisation. Every single person in Berthon gets involved and discharges their responsibility to ensure that we receive a world class product. It’s proof because the crews are very proud of the boats that they get and, so far, in the last 30 years.

Berthon lifeboats have saved 584 lives. They’ve also brought ashore something like 20 times that number; so Berthon boats have saved the equivalent of the population of Lymington.

The Shannon has proven to be probably the most acceptable boat to the crews, even before they’ve received it. We took the prototype round almost every station that was possibly going to receive the boat and any views that they had that it might not be the boat for them were completely overcome. It is so versatile, it also gets to the casualty in probably half the time that today it would take a Mersey to get there, and that was one of the principle reasons that we designed the boat; to get to the casualty sooner and to save more lives.

The crews think it’s wonderful. In fact, they’re so excited that they’re always pestering us to know if they’re going to get one and when it’s going to be. Berthon has proven to be one of the best organisations with which we’ve worked; to be able to deliver such a complex product as the Shannon Lifeboat, and I think I go to sea in my little boat feeling that the Shannon will be out there, if I need it, heaven forbid, but the crews will be there to ensure that I am safe”